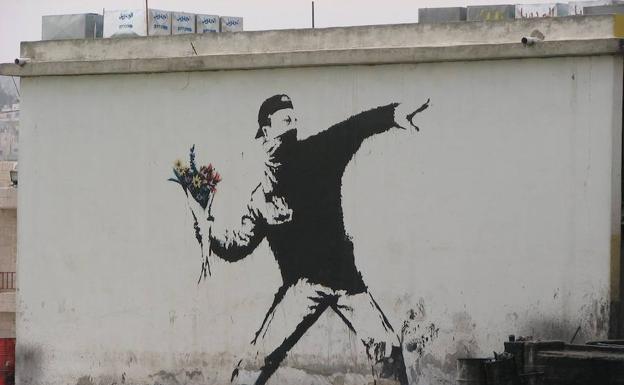 Banksy is the pseudonym of the most high-profile graffiti painter in contemporary Street Art. Although there are no concrete biographical facts to go by, it is believed he was born in the outskirts of Bristol in 1974, later moving into the city where he spent his adolescence. A recent study by Queen Mary University in London identified the artist as Robin Gunningham and confirmed he grew up in Bristol.

According to the illustrator and graphic designer Tristan Manco, one of the most ardent researchers into urban art, the controversial Banksy was an apprentice butcher before getting into graffiti during the 80's "aerosol boom". In the 90's, he was a gang member of Bristol’s DryBreadZ crew, aka DBZ, at which time his fame began to spread like wildfire, mainly due to his tit-for-tat overpainting war with the top graffiti artist of the day, King Robbo, whose work along Regent's Canal in Camden Banksy took the liberty of "revamping" repeatedly until, on learning of the late Robbo's comatose condition, he put an end to their feud and paid his rival a series of heartfelt tributes. see more

On the 12th of July 2008, the Mail on Sunday announced it had discovered his real identity, revealing his name as Robin Gunningham, which the actual Mr Gunningham has always denied when questioned. According to other sources, his real name might be Robert Banks or Robin Banks although the latter would appear to be a play on the words "robbing banks".

Whatever the case may be, mystery still surrounds him. According to Will Simpson, secretary of the Bristol Easton Cowboys and Cowgirls football club, the artist accompanied them on a 2001 tour of Mexico in which he played matches against the Zapatista Liberty Fighters. There exist photographs of him painting a wall mural in honour of their cause, his pixelated face well-hidden under a handkerchief and no other discernible clues to his identity whatsoever. Those photos were published in the book 'Freedom Through Football: The Story Of The Easton Cowboys & Cowgirls'.