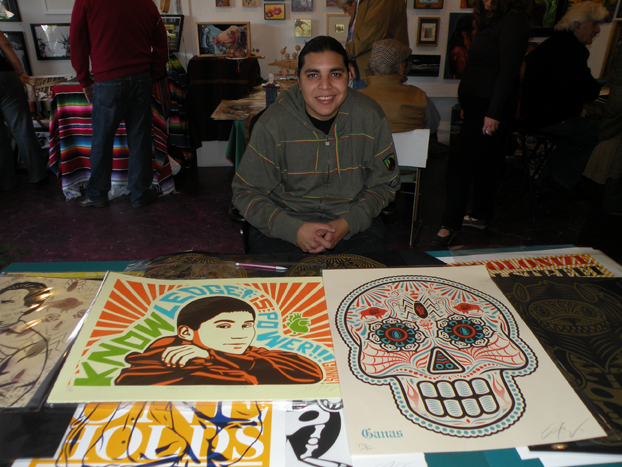 Ernesto Yerena Montejano was born in the United States, near Mexicali, in the small border town of El Centro. While he went to school in the United States, he spent most of his free time with his family in Mexicali. Constantly crossing the border gave Ernesto a unique perspective. He had access to the free education of the first world and the cultural richness and authenticity of his Mexican heritage.

Ernesto began college at the age of 17, receiving his BA in Graphic Design. He has also had the benefit of working as an artist assistant to Shepard Fairey of Obey Giant. In his own artwork, Ernesto focuses mainly on cultural issues within the Chicano community. He has worked at two of Los Angeles largest art studios - Self Help Graphics and Modern Multiples.see more

While Yerena identifies as Chicano he also strongly identifies as Native/Indigenous to this continent which is often seen in his work. Highly recognized for his activism, Yerena is the founder and curator of the Alto Arizona Art campaign (2010) as well as a founding member of the We Are Human campaign (2009).  His art brings political concerns to light with subject matter that depicts cultural icons, rebels and everyday people voicing their stance against oppression.