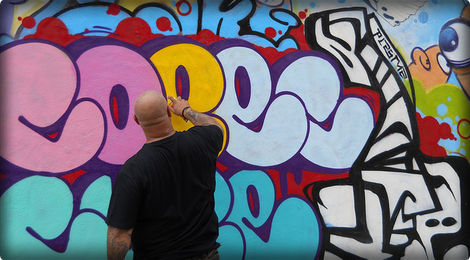 Cope2, born as Fernando Carlo in 1968, is one of the pioneers of New York graffiti art. Great, ingenious, controversial, admired, arrested, loved and respected, this legendary artist has been active in the street game since 1985. The first graffiti he ever wrote was on a train done in his wild style manner. The international credit came in the 90’s after he went through a troublesome time of working with gangs, living on the streets, and fighting to evolve as an artist. see more

To pursue a career in street art was not his initial desire, however, the spontaneous jaunts to lettering and tagging brought him to where he is now – a legend of the Bronx style and a true mainstream graffiti star.