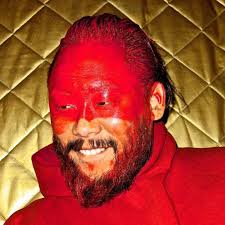 David Choe (born 1976, Los Angeles, California) is an American painter, muralist, graffiti artist and graphic novelist of Korean descent. He achieved art world success with his "dirty style" figure paintingsraw, frenetic works which combine themes of desire, degradation, and exaltation. Outside of galleries, he is closely identified with the bucktoothed whale he has been spray-painting on the streets since he was in his teens.

Choe's work appears in a wide variety of urban culture and entertainment contexts. For example, he provided the cover art for Jay-Z and Linkin Park's multi-platinum album Collision Course, and created artwork to decorate the sets of Juno and The Glass House. In 2005, internet entrepreneur Sean Parker, a longtime fan, asked him to paint graphic sexual murals in the interior of Facebook's first Silicon Valley office, and in 2007, Facebook CEO Mark Zuckerberg commissioned him to paint somewhat tamer murals for their next office. Although he thought the Facebook business model was "ridiculous and pointless," Choe, an inveterate gambler, chose to receive company stock in lieu of cash payment for the original Facebook murals. His shares were valued at approximately $200 million on the eve of Facebook's 2012 IPO . see more

Those murals were loosely re-created by Choe's friends Rob Sato and Joe To for the set of the film The Social Network. During the 2008 presidential race, Choe painted a portrait of then-Senator Barack Obama for use in a grassroots street art campaign. The original was later displayed in the White House.